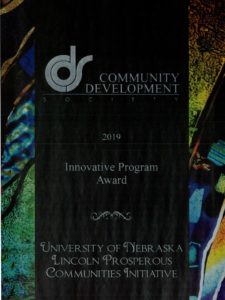 Community Prosperity is a new program initiative of University of Nebraska Extension. It focuses on three factors considered critical to rural community vitality:

Community Prosperity just completed a pilot year, with NU Extension Educators serving as community coaches to five small towns that agreed to help test this concept in various locations around the Cornhusker State. The five communities were Chappell, Stratton, Valentine, Ravenna and Nebraska City. They range in population from 340 to 7300 and are located from the Nebraska Panhandle to the banks of the Missouri River in eastern Nebraska. The experimental year was funded by a grant from the University of Nebraska Rural Futures Institute.

The Heartland Center's senior associate, Kurt Mantonya, served as the community coach in Ravenna in the central part of the state. Kurt is now a Community Vitality educator with Nebraska Extension, and he was in Columbia, Missouri last week to accept the award at the annual CDS conference.  Kurt was also elected to CDS board to serve a three-year term.

Heartland Center Co-Director Milan Wall is also a member of the Community Prosperity team as a consultant to NU Extension, and Milan was instrumental in documenting results of the pilot of the concept. Milan wrote case studies of each of the pilot communities and contributed to video vignettes. Here is a link to both print and video on Nebraska City

How can we help you?

Scroll back to top